Water Voles (Arvicola amphibius or A. terrestris) of Burwell Brook 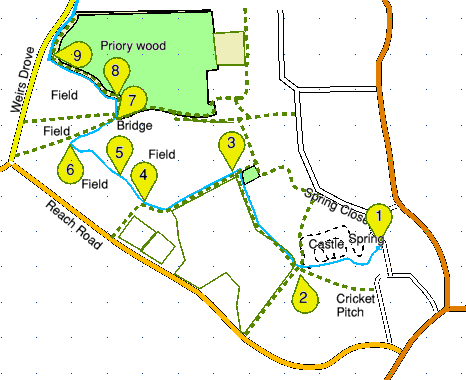 In autumn 2016 Burwell Brook was 'ditched' where it runs through farmland. This was unnecessary as it had been ditched a couple of years earlier and the vegetation was only just recovering. However this section of the stream was the site of an apparently large water vole colony. I had thought there were water voles present as, walking alongside the brook in the summer of 2016 I had heard a plop, characteristic of voles. The 'ditching' has laid bare many of their runs.

It is illegal to disturb Water Voles so I contacted the Cambridgeshire Wildlife Trust. They do not have the manpower to do anything but I got back excellent advise to give the farmer. However I did not know who the farmer was, so contacted the Parish Council. They told me to contact East Cambs District council. The receptionist tried to be very helpful, but no, not their remit. Try the Environment agency. No, not them either, try Natural England. Their response was quite definite:

"Water Voles, their breeding places & resting places are protected by law and, as such, any disturbance of their habitat is a criminal offence and should be reported to a Wildlife Crime Officer through your local Police Force."

So I did a search for WildLife police and contacted the Cambridgeshire Officer. He had a word with the Wildlife Trust to find out their advice, then he contacted the farmer (Henry Hurrell).

However this farmer is said to be retiring this year, but may keep farming by contracting. We will have to wait and see what the future brings!

The photos, taken January 31st 2017, clearly show that the holes have been cleared of debris from the ditching so the colony is very active. I just hoped that the razing of the banks has not completely cleared their food source away.

3rd April 2017. It seems the ditching work has had a severe impact. Most of the holes that were photographed are now partially blocked by falling dirt so are clearly not active. Lots of the vole tracks have disappeared. However there are still some holes that are still active.

23rd April 2017. A walk along the brook today revealed no real evidence of any vole activity. Almost all holes are partially blocked by falling dirt.

8th August 2017. The ditching work was apparently just removal of the vegetation at soil level, with little disturbance to the roots, for the vegetation has been growing back. It seems voles may already be coming back into the area: I heard a characteristic 'plop' and a definite movement beneath a patch of watercress. This was near the bridges where the brook meets the wood. One hole looked like it may have been re-excavated.

You can get a large version of the map above by clicking on it. The vole colony photographed was between markers 5 and 8 - it probably extended further downstream, but this part of the brook is less accessible and had not been razed.

25th October 207. Recently some of the holes near the bank top near point 5 have made me wonder whether they are being re-excavated. Today another hole, shown in the photo 14, seems to show more definite signs of re-use. No proof of water-voles - there are other animals that could use a vacated water-vole hole.

Click on a thumbnail for an enlarged view (with comments). Clicking on the enlarged view will download the full size original photo.

16th November 2017. The vegetation on the bank was mowed! This is part of mowing all field borders and is not specifically ditch work. Fortunately clearance did not extend far down the banks of the stream, so although it is disturbance to the voles it is not major.

5th December 2017. There is now significantly more evidence of vole activity. Several holes have spoil heaps running down the bank beneath them and there are noticeable runs along the bank in a number of places.

25th March 2018. There has been plant growth along the stream all winter and several holes have shown signs of active occupation. In particular photo number 18 which is of a burrow with outside toilet. This seems to be unusual as normally latrines are some distance from entrances.

9th of August, 2020. I saw water vole swimming under water in Burwell Lode, where it passes Priory wood, at map reference TL 581 666. So it is a fair assumption that the colony extends much further north than the map above covers.

Derek Gow consultancy run http://watervoles.com. They specialise in Water vole conservation and have a document which is interesting regarding re-colonization.

Was this page helpful? Please email me and/or rate this page:


If you want a reply make sure any email address @torrens.org will not get spam-binned!